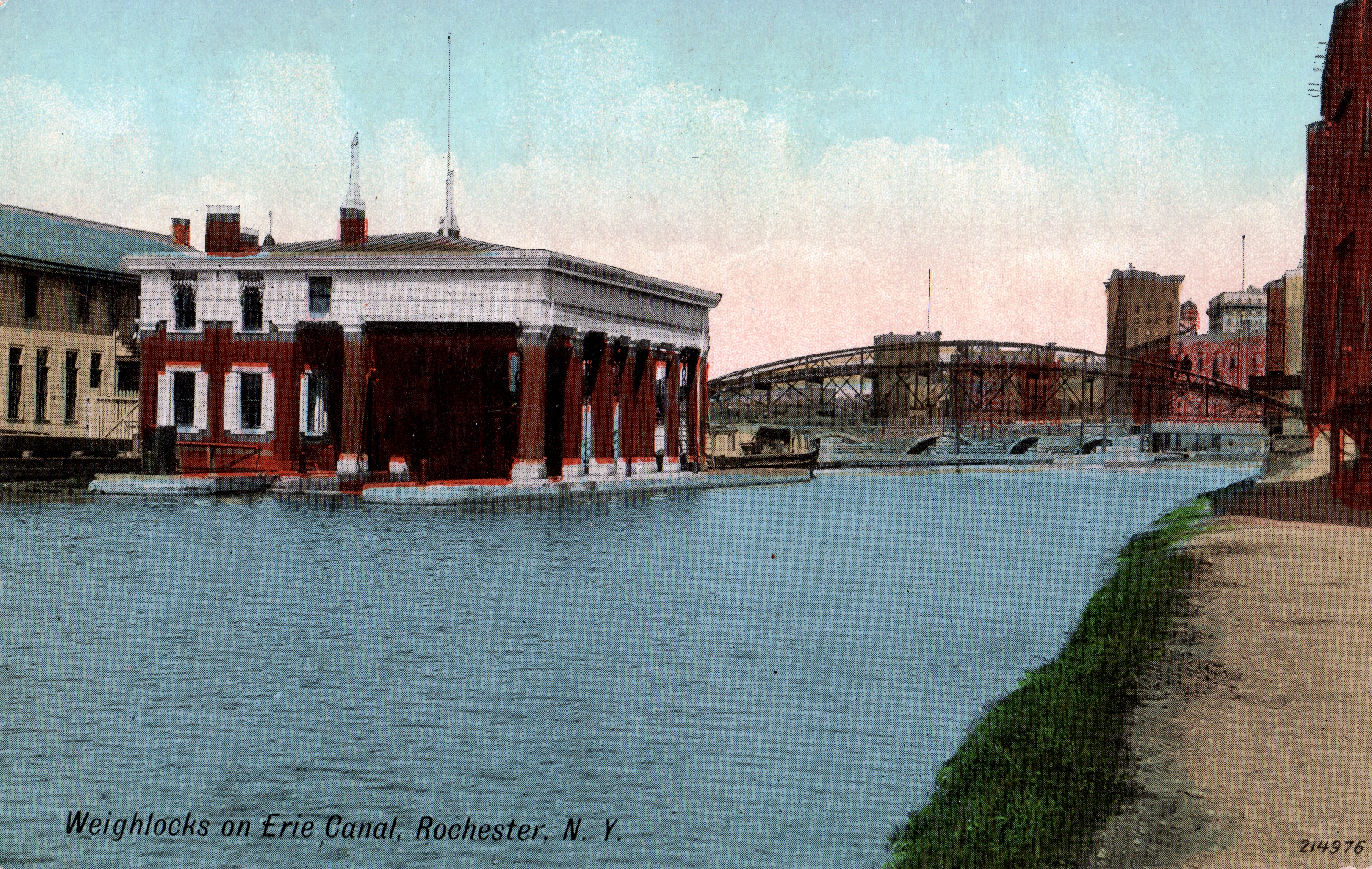 For our latest chat, we reached out to the Erie Canal Museum in Syracuse (Onondaga County). DHPSNY staff had a wonderful visit there in early 2017 when the Museum hosted one of our Essential Policies and Procedures workshops, and we’ve since wanted to dig deeper into the Museum’s history and collections. Ashley Maready, Curator of Collections & Exhibitions, and Amie Flanigan, Project Archivist, teamed up to answer our questions.

Can you tell us a little about the Museum’s founding and the effort to preserve the Weighlock Building?

The original part of the Erie Canal Museum, the Syracuse Weighlock building, dates to 1850. It is the third such building on this spot. In the heyday of the Canal, it functioned as the busiest weighlock in the system—there were six other buildings like this one. Syracuse was in the middle of the main Erie Canal route and was also at the junction with the Oswego Canal.

In 1883, toll collection ceased, and the Weighlock became a dry dock for repairs and a State office building. The Canal was filled in and paved over in the 1920s, but the Weighlock remained an office building until the 1950s, when it was proposed that the building be given to the State Education Department; this move was vetoed by then-Governor Harriman, under the pretense that future construction of Interstate 81 would take out the building. This was confirmed in drawings by the Department of Public Works. The Syracuse Junior League and other interested parties lobbied to get the Weighlock Building transferred to ownership by Onondaga County, with the understanding that it would become a public canal museum. It opened as the Erie Canal Museum on the evening of October 25, 1962, officially opening to the public the next day. The Erie Canal Museum continues to thrive; we welcomed over 23,000 visitors in 2017! How do you document and present the history of the surrounding region and the construction of the Canal?

Our museum is special because we document and present the entire history of the Erie Canal, past, present, and future. We're free to showcase a broad history, as in our new first floor introductory exhibit, completed in 2015, that provides visitor with an "Erie Canal 101.” But we're also able to give a more focused perspective; for example, one of our current exhibits consists of beautiful photographs of Spencerport, a small Canal village in western New York that a lot of our visitors may not have ever heard of. In October, we'll have a Curator Talk at the museum about the history of the Oswego Canal, the tributary canal that once connected the Erie Canal in Syracuse to Lake Ontario by way of Oswego (and today connects the Erie Canal at Three Rivers to Lake Ontario). We are lucky to have friends all over the State to help us with information, programming, and other resources on the history of the Canal, and we have a lot of Canal resources in-house, especially photographs.

"The Museum's artifact collection numbers over 50,000 items, and much of this is archival material... They relate to the over two-hundred year history of the Erie Canal, lateral canals, maritime history, and waterways in the United States and internationally."

What’s the size and scope of the Museum’s archival collections?

The Museum's artifact collection numbers over 50,000 items, and much of this is archival material. The Museum houses photographs, diaries, postcards, ledger books, bills and receipts, passenger lists, and oral histories. They relate to the over two-hundred year history of the Erie Canal, lateral canals, maritime history, and waterways in the United States and internationally. Some of the more interesting and unique collections include archival materials from the Brennan Motor Manufacturing Company--a Syracuse Canal-era business--and the Parley Bassett papers. Parley Bassett was a Syracuse resident for 60 years during Canal days and served as a toll collector on the Canal just prior to the construction of the current Weighlock Building.

Since 2012, the Erie Canal Museum has housed the archival collections of the Canal Society of New York State (CSNYS). These collections amount to approximately 735 cubic feet of materials in a great variety of formats, from the period of 1780-2012. The geographic scope mainly covers New York State, with the Erie Canal and its lateral canals, but also includes a good deal of information regarding the St. Lawrence Seaway and Welland Canal in Canada.

What can you tell us about the current exhibit, Wish You Were Here: Erie Canal Postcards?

Wish You Were Here was a lot of fun to put together. The Museum has postcards from cities and towns all over New York, and especially those on the current or former Canal. The early 20th century was the Golden Age of Postcards, and since postcards were most popular in the rural northeastern United States, Erie Canal postcards are plentiful! The ones that were written on and mailed are the absolute best, because they sum up the writer's life at that exact moment in history—a thought that we might express via social media or a text message today would have been put on a postcard and mailed to a friend or family member. Even the blank ones often have beautiful or interesting images of Canal days gone by or sights that one can no longer see on the Canal, such as now torn-down Weighlock buildings. The exhibit will be up until early May, and after that, the panels will be available for rent to other interested institutions! Do you have a personal favorite item or collection of items?

Ashley: Last spring, we received a donation of eight carved wooden canal worker figurines. They were created by Max Schwegler, who was a local artist, and donated to us by his daughter. They weren't finished, and are in varying stages of completion, but I just love the level of detail incorporated into them!

Amie: My favorite item in the ECM collection is a broadside advertising the journey of a 65-foot long, embalmed whale down the Erie Canal to Seneca Falls in 1891. It is an unbelievable story and a true one! The broadside claims, "A person 6 feet tall can stand erect in his mouth, between the Monster's jaws. We have had 25 young ladies and their teacher in his mouth, all at the same time; also seen 12 gentlemen seated in his mouth, enjoying an oyster supper." Just imagine the spectacle... and the smell!

To this point, we have found New York Heritage to be a great way to share selected items with the public. For example, we received funding from the Council on Library and Information Resources that ran from January 2016 to August 2017 and was for improving access to some of our "hidden collection" items, namely glass plate negatives. Both the Museum and the Canal Society collections had these, and prior to this project, they were stored poorly and most of them hadn't been looked at in years. Many of these are now available for viewing on New York Heritage Digital Collections, and near the end of the project, the Museum received a donation of almost 250 more negatives showing the construction of the current New York State Canal System. Work with these negatives was funded in part by the Gladys Krieble Delmas Foundation.

Interested parties may also contact us to request information and images from our collection. Usage policies and fees may be found on our website. Our hope is to continue improving digital access through additional grant funded projects. Right now we have several pending applications for funding to create finding aids and online bibliographic records for both ECM and CSNYS items, as well as to support digitization of items. 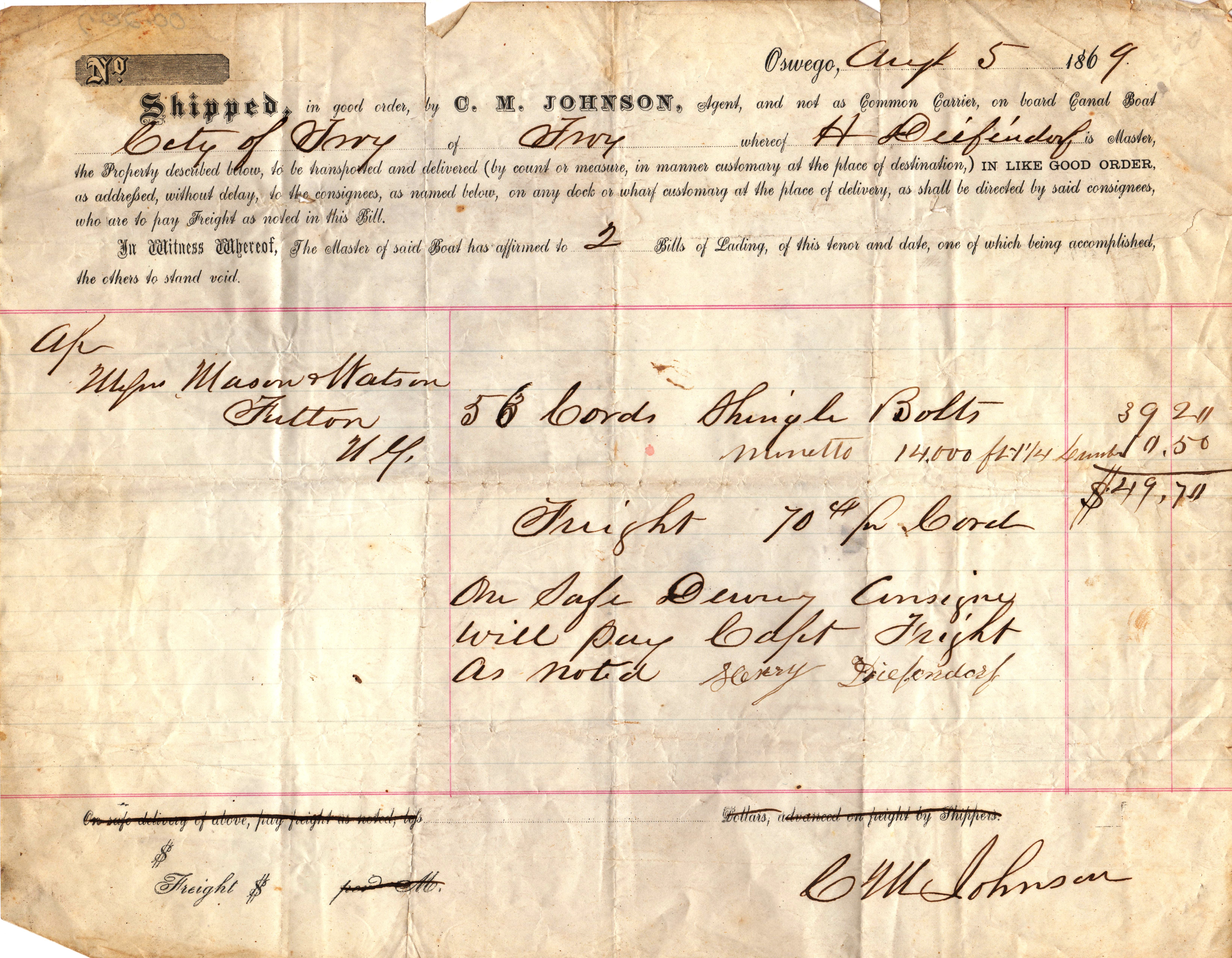 Have your collections been used to support any interesting research projects?

We receive a lot of research requests from students and amateur genealogists, and occasionally we're asked to contribute images or information to projects that will be seen by a wider audience. Images from our collection were used in an episode of the Travel Channel show Bizarre Foods for a Canal-specific episode last year. A postcard showing the Erie Canal at Rome, New York, from our collection was used as the image for the 2017 Cycle the Erie bicycle jersey. And Buffalo-based artist Dana Hatchett has made many drawings of the 19th century Erie Canal based on photographs in our collection—we actually exhibited some of his work featuring Buffalo here at the Museum at the end of 2017.

Are there other upcoming exhibits you'd like to mention?

2018 is a big year in the history of the Erie Canal; it's the Centennial of the current New York State Canal System, which opened in May 1918. We have a few upcoming exhibits this year which will commemorate this milestone. This summer, in our large second floor gallery, we will be featuring construction photographs of the Western Division of the Canal in the exhibit From Clyde to Buffalo, which is being curated by canal boatman and photographer Bob Graham. In the fall, we will host an exhibit of photographs taken by father and son Cliff and Gabe Oram of the Eastern Division of the Canal. The Orams are the creators of the popular Facebook page "The Mohawk Valley Through the Lens."