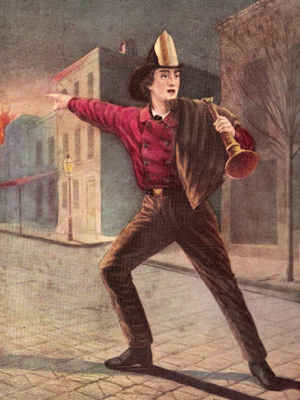 Earlier this month, we began a new series of brief conversations with library, museum, and archives professionals and volunteers from around New York State. In our latest installment, we caught up with Jamie Quinn, Executive Director at the Firemen's Association of the State of New York (FASNY) Museum of Firefighting in Hudson, New York. Jamie has been at the Museum for 12 years and overseen the continued expansion of an archival collection of handwritten journals, service manuals, photographs, and other items that document the history of firefighting, from the lives of the firefighters themselves to the evolution of its tools and its depiction in popular culture and fine art. Thanks to Jamie for taking the time to chat with us.

Tell us a little about the history of the Museum of Firefighting. How did it begin, where is it located, and what’s your mission?

How did FASNY build its archival collections?

Ninety-nine percent of the artifacts in the Museum’s collection have been donated, from the 20,000-plus smaller objects, including archival items, to the 90-plus fire engines. We continue to build the collection and actively seek out artifacts and archival items on our wishlist.

What’s your favorite item in the museum’s collection?

I would have to say a letter from a Civil War solider to the mother of his departed comrade. It was not unusual for firefighters to join the Union forces together and they actually formed their own unique units sometimes. They would also have their fireman’s badge with them many times. This poignant letter described the death of the son to the mother and let her know that the writer would be visiting her to return her son’s fireman’s badge to her after the war. We actually have both the letter and the badge in our collection. The letter is just heart wrenching, as he describes his friend and his demise.

How do you make the collection accessible to the public?

Visitors can make an appointment to use the Museum library or access any of the archival materials. We also have archival items on exhibit, such as fireman’s certificates, firehouse documents, etc.

Has your collection been used for any interesting research projects?

We have used the archives ourselves to develop a “Mysteries at the Museum” presentation for a group. We found out some really interesting facts about Clapp and Jones, a local steam fire engine manufacturer here in Hudson. It made it clear that this company was a leader in this field and that one of the founders, Mr. Clapp, was known worldwide as a steam engine expert and his advice was sought out by many people. I also write an article for Firefighter magazine and have used the archives for research to write articles on many subjects that were interesting, especially concerning the important figures in firefighting in the 1800s, who were akin to today’s rock stars.

What programs do you have in store for 2018?

We will be using the archives to update all the apparatus object cards. We are reformatting the cards and adding more information to each object card. We also have a major expansion of the Museum that will occur in the next two years. This will include a new archival and collections area, so we will be doing the legwork to prepare for that expansion.

Photos, from top: Currier and Ives lithograph from the series "The Life of a Fireman"; Elsie L. and Robinson, David E. Lowe. Firehouse History: 1775 - 1975. Village Mailer, Inc., 1975; Record of the Proceedings of the Commisioners of the Buffalo Fire Department, 1857.​