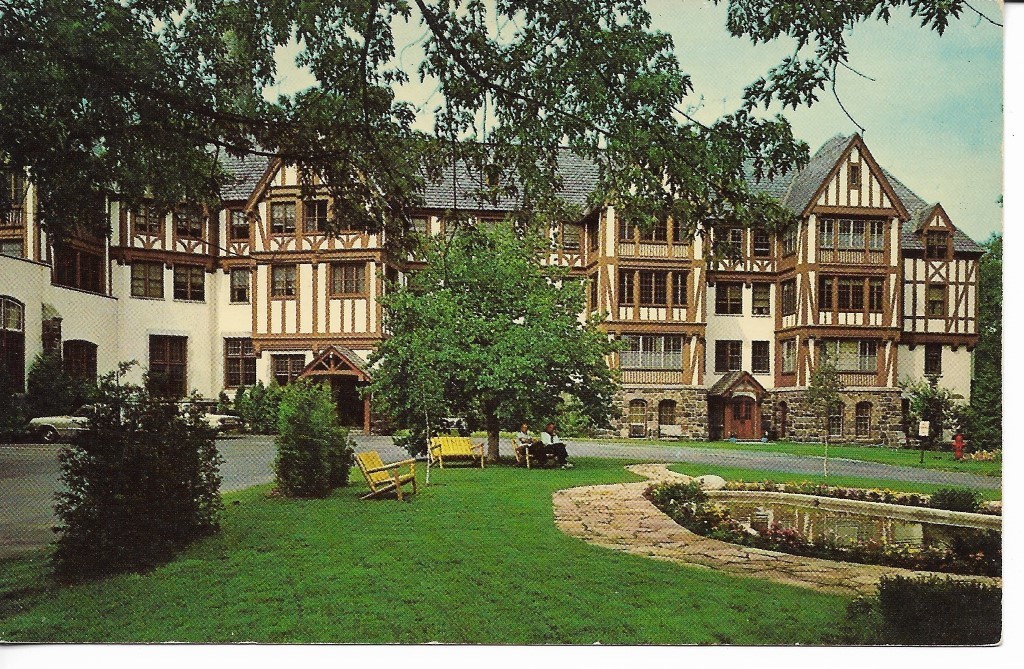 For the latest chat in our ongoing Q&A series, we caught up with Leslie Hoffman, Historian at Saranac Village at Will Rogers, home of the National Vaudeville Artists Lodge / Will Rogers Memorial Hospital in Saranac Lake, NY (Clinton County). Since we last spoke, the history of the Will Rogers, formerly a tuberculosis hospital built to treat America's Vaudeville stars, has taken on new significance as the world copes with a new respiratory illness and an uncertain path to a new normal. Designed to promote recovery from the disease, while also allowing its ailing patients to stay connected to their professional and personal communities, the Hospital was the first and only of its kind in the United States. We talked to Leslie about the historical significance of this unique health initiative, the truth behind the property’s bronze Will Rogers statue, and more.

Where is  Saranac Village at Will Rogers located? Can you describe the  building  and its surroundings?

It is located in Saranac Lake, NY, which is 9 miles from Lake Placid (home of the 1932 and 1980 Winter Olympics). Also, it should not be confused with the town of Saranac, which is 40 miles east of Saranac Lake.

In contrast to the stark, institutional architecture of hospitals built in the same period, it is a Tudor Revival mansion, originally situated on a 40-acre lot. In 1925, when the property was acquired, there were some buildings already here, so people from the Vaudevillian era actually started curing here in 1925. Construction of the new mansion started in 1928 and the building was finished and dedicated in 1929.

Another building, a medical library, was built and named the Montague Memorial Library and a decorative pond was created and named the Montague Plaza, which patients could sit near and rest. Part of the main building had a laboratory named the R. J. O’Donnell Memorial Laboratory. The Laboratory named for R J O'Donnell was due to his passing in the late 50's. The Medical Library and Pond named for Abe Montague was built and named in his behalf in the early 60's. Both had been Presidents of the Committee overseeing the WR Hospital.

Can you talk a little about the historical significance of the national vaudeville artist lodge / will rogers memorial hospital?

This Hospital was built specifically for Vaudevillians and the entertainment industry. When it opened in 1929, it provided free healthcare to employees and retirees—including those who worked in management and any employee at a theatre. Edward Franklin Albee, the owner and president of the National Vaudeville Artists (NVA), would put on benefits each year to collect money for the the building's construction and maintenance. As the entertainment industry expanded into film, the Hospital opened to the cinema’s actors, managers, and behind-the-scenes employees as well. In movie theaters across the country, the Hospital made public-service announcements at the start of films where notable people from the industry asked the audience for donations, such notables included John Wayne, Clint Eastwood, Cary Grant, and Gregory Peck. Then, at the end of the PSA, a tin tube would be passed around the audience so that donations could be collected.

Do you have a favorite story or piece of trivia?

One of my personal favorite pieces of trivia is that the Will Rogers Statue that stood in the rotunda was not actually made out of bronze. It was the original plaster cast that was used to create the statues that stand at the Will Rogers Museum in Claremore, OK and in Washington DC. It was only painted a bronze color.

Are there any exhibits, projects, or events you'd like to mention?

The Saranac Village is hoping to celebrate its 20th Anniversary later this year. At this moment, however, there are no dates scheduled. When social distancing restrictions are lifted, visitors can find on display the Souvenir Benefit Books from the National Vaudeville Artists, pictures of the Will Rogers’ Statue that used to stand in the Rotunda, occupational therapy items created by the patients, and postcards from all eras. In closing, I would love to offer my help to answer any questions people might have or if you would like to visit us, please let me know.

Related: watch DHPSNY Program Manager Anastasia Matijkiw dance to "Our Favorite Son" from The Will Rogers Follies, a musical about the life and career of Will Rogers (She's in the center, wearing red!).